'Last Christmas' pre-dated my relationship with Gail by three years but she always said it reminded her of me. Was it because she 'gave me her heart'? Or was it because I initially 'gave it away'. I never liked to ask.

Anyway, her ringtone assigned to me was Wham's opus. This would provoke cries of 'Awww' if I called her when she was out with friends during December, but it would also cause quizzical looks if I rung her during Ascot week in June or at a Barbeque on Easter Sunday. It was a year-long 'treat' for her but one, obviously, I wasn't privy too.

Then they announced the release of the film 'Last Christmas' this November and my heart initially sank. I knew I had to see it, knew I'd be an emotional wreck, knew - probably like 'Love Actually' - it would be a rollercoaster ride I'd almost certainly need to take every Christmas from now on.  Then the huge negative critical feedback began and my heart sank even further; it wasn't even any good! The tears might instead be those of anger and frustration. Even though the sublime Emma Thompson was involved, I just wished they'd left the whole thing alone. But it made no difference; I had to go. So it was with huge trepidation I visited my local World of Cine to catch the film.

I don't want to review 'Last Christmas' here; the literal translation of the song, the 'predictable plot twist' (that I simply didn't see!) might make your heart skip in surprise or make you groan in frustration, the depiction of friendly, extremely patient London bus drivers and near-empty streets make you howl with laughter at best or shake your head ruefully at worst, but those of you who have followed this Calendar over the years will know who would have loved 'Santa's' shop and probably demanded 'I want one of those!' 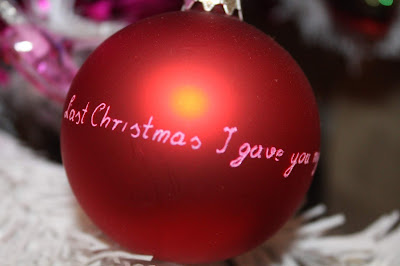 Isn't it always the way that the one bauble you really want and can't replace is the one that gets smashed?

Gail would have loved the depiction of London - we always stayed in the West End over Christmas - the lights, the sights we saw regularly. Is it 'twee, forced, precious, shocking, monumentally bad?' Probably. But as the film ended and a strange sort of excited, emotional clamour descended on the paying audience - something I've not caught in the cinema for many a long year - I felt the person sitting in the empty seat next to me turn to me and say 'I loved that'. She'd have held my arm as we left as she'd have talked excitedly about wanting to visit Santa's shop in Covent Garden and buy all those awful baubles for her kitsch Christmas tree. She'd have loved the soundtrack; she'd have cried. And that's good enough for me.

'Last Christmas' itself - dedicated to Lady B - was on the 7th Calendar in 2013 so I can't use it here but 'December Song' - which oddly didn't appear in the film at all - was a track I bought for Gail on its release in 2010; it's got a nice 1940's type feel to it and a video that strangely seems to have put something into my eye.

As for 'Last Christmas', it will be on rotation on every festive TV listing until there are no more films or TV. Love it or hate it, I can live with that.