He'd asked her to the office Christmas Party he'd organised. It was a huge step to take and he knew it was likely to end in tears either way but, as so often where she was involved, any resolve he had to do the right thing just seemed to melt away.

He rung at her at 6pm, just as he was about to leave to ensure the finishing touches were in place for the party, due to be held in the upstairs of a local West End pub. She'd only just got in from work. If she was coming it will take her an hour plus to get ready and her home was a good 90+ minutes away. She wasn't coming then. She said she was, but he knew. Fair enough, it was always too good to be true and it was probably for the best anyway.

The packed party was in full swing by 8pm; these parties were good - very good - and most agreed they were one of the highlights of the year. He'd got everything just right, everyone was saying it was the best yet, he should have been enjoying himself but his heart wasn't in it. Against his better nature, he'd already gone down to the street and looked for her as if he could conjure her out of the cold December night. He had to pull himself together.

At 9:15 - fashionably late - it happened. A perceptible change in the noise level. If it was an old-style Western, the film producer might have emphasised the moment by having the saloon bar piano player stop. But the DJ kept playing.

Instead, the crowd parted as if pulled aside by an invisible force. In a way, it was. Years later, he wondered if his mind had played tricks and it wasn't like that. But it was. She could do that and he saw and experienced it many times after.

'Take your breath away' is usually little more than an epithet with little basis in fact. This wasn't. His stomach flipped, he caught his breath. She was the most beautiful woman he'd ever seen and ever would see.

Without a word, she walked up to him, put her arms around his shoulders, her hand on the back of his head, leaned forward and kissed him full on the lips. 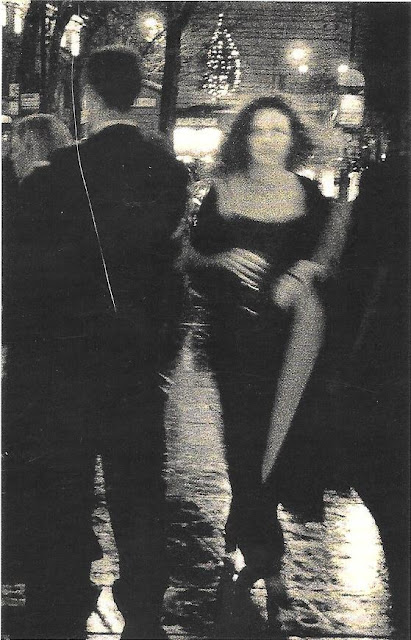