My father passed away in November; quickly and relatively painlessly, I think you could claim he'd had a good innings.

He'd managed 91 years on this planet, despite being a heavy smoker as a younger man and a pipe-smoker in his latter years, dodging V1's, V2's, TB, being on board a submarine when it was hit by a Royal Navy Destroyer, years of playing snowballs with asbestos in his days as a Marine Engineer apprentice and, of course, living with my Mother.

For five years he was actually Father Christmas at the local church; a slight - some might say skinny - one but the children in the local community seemed to like him anyway. However, this jarred with my memory of him as Santa. I recall instead one Christmas Eve when I was rudely awakened in the middle of the night by the sound of Father Christmas swearing profusely and hopping around in my bedroom as, delivering the new bike I'd asked for, Santa had then fallen over the gift in the dark as he left, stumbling onto the outstretched pedal with his knee. Still, at least I didn't find out about it from the other kids.

If he had a favourite Christmas song then he never told me and his understanding of the Internet was non-existent at best, so I'm not going to dedicate a song to him here, just post this photo of him as Santa. 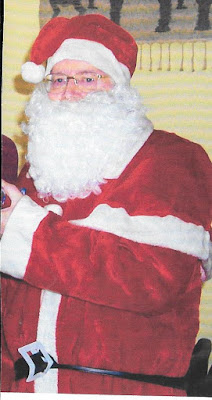